“Kid, when I was your age, we programmed computers by hand using ones and zeroes. And some days we ran out of zeroes.” Okay, boomer, but today’s programming languages are a wee bit more advanced now. So advanced that it’s tricky to know which language(s) to learn or how useful they’ll be. Will C# expertise get me a job? Is it worth learning Perl? Should I hone my ninja Java skills or switch to Python?

Turns out, there’s an answer to that. International programming school Coding Dojo has been scouring job listings for years to see which languages are in demand, which are declining, and which are on the rise.

In a hurry? The short answer is Python. That’s the most-requested language in early 2021 job listings, according to Coding Dojo’s annual survey. Python took over the top spot from SQL a year ago, as the chart below shows. (Black bars for 2020; red bars for 2021.) 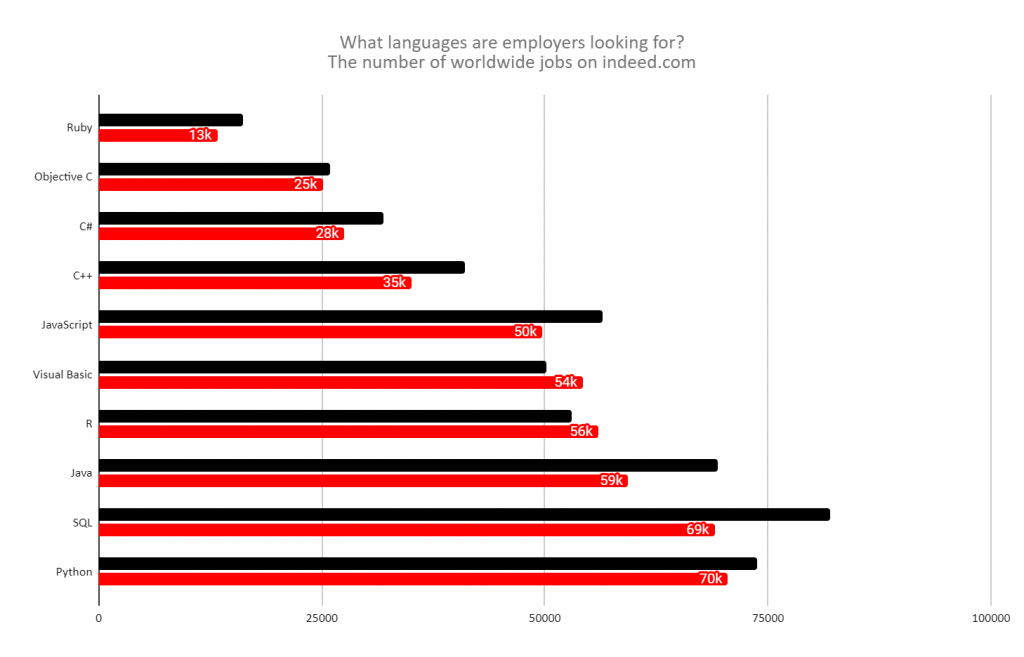 Job listings took a hit across the board in 2020, so the absolute quantity of programming openings did, too. That’s not surprising. Even so, demand for a few languages grew despite the overall downturn. Visual Basic, R, Swift, TypeScript, Go, and Kotlin all saw gains in January versus their numbers a year ago.

The biggest loser by far was PHP, where demand tanked by 54%. Perl was down 22%, and SQL and Java both declined by 15%. PHP had ranked 10th in overall popularity in last year’s survey but struggled to hold on to 13th this year, behind Matlab, Perl, Ruby, and three different flavors of C.

Coding Dojo collects its numbers using job-search site Indeed.com, where it scans “hundreds of thousands” of job listings, according to Lappala. Naturally, it’s an automated process, doing Boolean searches for keywords. The company had also evaluated Monster, GlassDoor, and other sites but settled on Indeed, in part because it hosts both entry-level and advanced positions and covers a range of industries. They’ve stuck with the site since the survey began in 2015.

Perl-related job openings have been declining for years, as the chart below shows. PHP, on the other hand, was growing nicely until its sudden reversal. C# and C++ have held pretty steady, but neither ranks in the top six, despite being broadly established and having nearly universal applicability. Java is still popular but shows signs of slowing demand. It’s only Python that has enjoyed a lunge in popularity – or more accurately, in demand. 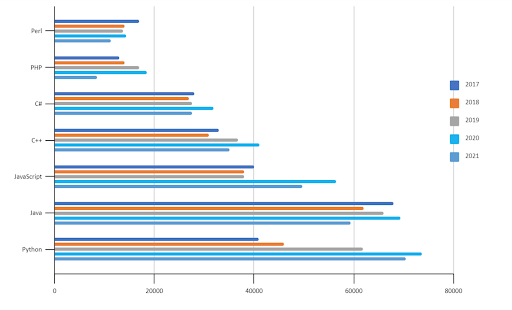 Fans of Rust, ABAP, or Scala will be happy to know their favorite language made the cut, but just barely. Where Python programmers have over 70,000 jobs to choose from, ABAP (an SAP-specific reporting language) had just over 1,000. Rust nearly doubled that, and Kotlin (useful for Android apps) made it to 20th place in the rankings, behind Ruby on Rails, VBA (Visual BASIC for Microsoft Office Applications), Go, TypeScript, and Scala (which had about 6,000 posted job openings). It’s a sad world when BASIC programmers have more job opportunities than those using Ruby, Rust, or assembly language.

Coding Dojo takes an interest in job openings because its real business is in training programmers. As the name suggests (“dojo” is a school of martial arts, typically Japanese), the company takes aspiring programmers and turns them into professional coders. Lappala says they accept everybody from absolute newcomers who’ve never typed on a computer, to experienced programmers who simply want to learn a new language. He likens Coding Dojo to military boot camp or immersive foreign language training: very intensive, very fast, and very effective. Programs – that is, classes – typically run for 14 weeks, with trainees putting in 70–90 hours per week. The dojo offers both on-site and at-home training classes, with ten campuses in the United States and more globally.

“The cliché that ‘every company is a tech company now’ is true,” says Lappala. “Demand for these jobs is very, very high and they’re not going away anytime soon.” His numbers bear that out. Coding-related job openings have grown steadily since the company started tallying them, and even in a down year, some language-specific numbers went up. Someday maybe we’ll all be using Python.

4 Reasons Python is taking over the world – App Developer Magazine

Which coding language should you be learning? With this sale, you can learn seven of the biggest – The Next Web