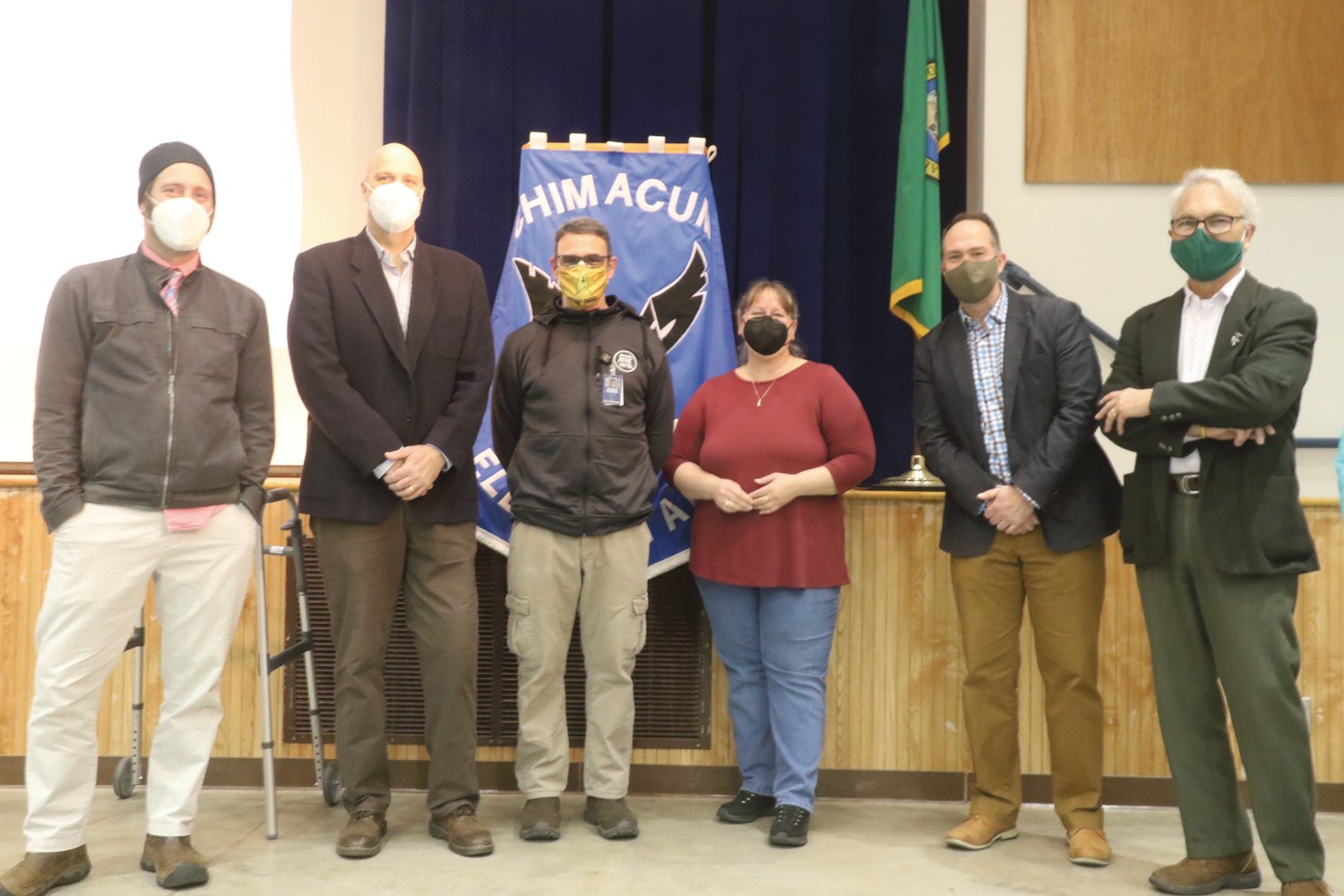 Alfonso Gonzalez, a sixth-grade science teacher with the Chimacum School District, has been recognized by the Northwest Council for Computer Education as its Outstanding Technology Educator of the Year.

Gonzalez was surprised with the award during a live broadcast of the council’s virtual keynote event Thursday, March 18.

In what was the first indoor group gathering by the faculty since March 2020, Gonzalez and his colleagues met in the school’s auditorium to watch the broadcast, when the news was announced.

“It’s amazing, I can’t believe it,” Gonzalez said moments after receiving his recognition.

The teacher said he had watched countless Northwest Council for Computer Education keynote events in the past but had no idea what was in store for him that afternoon.

After receiving the award, Gonzalez said his educational philosophy surrounding science, technology, engineering and math (STEM) stemmed from putting teaching tools into his students hands, rather than offering abstract lessons from a distance.

“For me, the technology is just how things are done now,” Gonzalez said.

The teacher added that a huge contributor to his love of teaching science comes from giving his students the chance to roll up their sleeves and really dig in.

“We get to do amazing hands-on projects; we’ve got a creek right by our school so we get to do actual field science,” he said. “It’s a dream job, I love it.”

One of Gonzalez’s fondest memories from his time in his high school science class was when his teacher demonstrated how a certain flatworm, known as planaria, can regenerate over time despite being cut into various sections.

“The tail end grew a new head and the head grew a new tail and we went crazy,” Gonzalez said. “That stayed with me forever.”

Now, as a teacher, Gonzalez has used that experience to show his own students the magic of planaria taken from water samples gathered from the nearby Chimacum Creek.

Gonzalez recorded a video demonstrating the regenerative power of planaria for his students so they all could witness it just as he had.

That lab, he added, is always a hit with the kids.

“By the end of that lab, the kids are in love with the bugs.”

With many teachers having been forced to embrace technology during the pandemic, Gonzalez said he hoped to see teachers continue to leverage technology back in the classroom.

“We can’t not teach our kids with technology — that’s what they’re going to use, whatever they do,” Gonzalez said. “I want them to see the power of technology. It’s not just for remote learning.”

Chimacum School District Superintendent David Engle said it became apparent when he arrived at the district last August that lessons would need to be taught at least partly remote.

Engle approached the faculty to figure out where he should turn to facilitate such a transition.

“They said ‘Al.’ So he was nominated right away by his colleagues,” Engle recalled.

“And he turned out to be just an absolute rock of support in getting our teachers ready for this school year which has been crazy and — even though we’re in-person most of the time — we still have a lot of online stuff going on.

“He was really helpful in getting the school year off to a good start,” the superintendent added. “Teachers will tell you that if it hadn’t been for that week before school started and Al’s work, they wouldn’t have been ready. He was a lifesaver.”

Engle shared Gonzalez’s hope to see technology being used as part of in-person instruction even beyond the final days of the pandemic.

“If we’ve learned anything from this pandemic, it’s we really need to learn to use these tools better,” Engle explained. “[Gonzalez] has offered so much in terms of ideas about how to use these tools well, and do cool things with the kids, so we’re going to continue to grow our practice.”