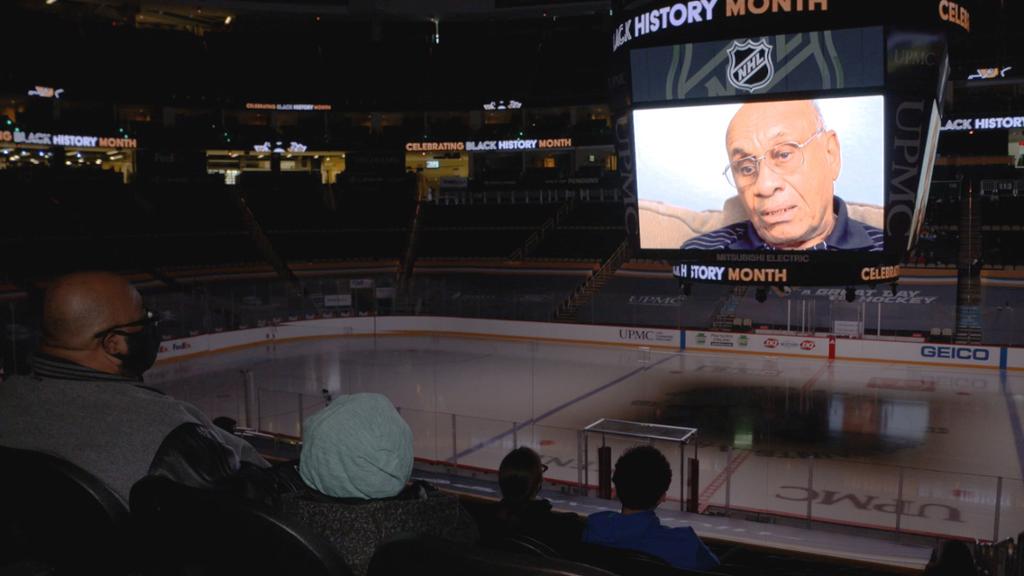 The Penguins hosted a screening of ‘Willie,’ a documentary that tells the inspiring story of Willie O’Ree – the first Black NHL player – on Sunday, Feb. 28 at PPG Paints Arena.

“It started with him,” Penguins rookie defenseman P.O Joseph said. “He’s the reason why it’s so open-minded now with Black players playing in the NHL. We can’t thank him enough for everything he did for us and to open the windows for us to come through.”

The day before, the Penguins also hosted a skating party in Schenley Park, which was free for all to attend and skate rentals provided. The organization is committed to making hockey more accessible all across the community, and this event was part of that commitment.

“The Foundation is working to bring hockey to new audiences and new families,” said Jim Britt, executive director of the Pittsburgh Penguins Foundation. “And we wanted to provide this opportunity for them to come out and skate and see what it’s like to get out on the ice and try it out for the first time.”

It was the perfect weekend to conclude an incredible month of programming provided by the Penguins to honor Black History Month, as they continue to set the bar around the league for what clubs can and should be doing to celebrate Black achievement in hockey and make the sport more welcoming and inclusive.

Video: The Penguins recap the B.H.M. activities from March.

The organization ended up hosting six virtual programs: four that were open to the public, and two that were dedicated just for staff. The Penguins also announced the creation of the Willie O’Ree Academy, a nine-week training program starting in June that will bring together local Black youth players and provide unique training, social and mentorship opportunities.

“We have a number of diversity programs that we will be rolling out in the next few months, but this one is special because it honors Willie’s legacy while creating unique growth opportunities for Black youth already playing hockey,” said David Morehouse, president and CEO of the Penguins.

When looking at ways they could use their platform to amplify and support the Black community this February, the Penguins looked at the national theme for this year’s Black History Month as set by the NHL and the Association for the Study of African American Life and History: “Black Family: Representation, Identity and Diversity.” The Penguins then created programming centered around integrating hockey into those three subject areas.

“Doing the programs virtually is so important because we had the opportunity to reach even more people,” said Delvina L. Morrow, the Penguins’ Director of Strategic and Community Initiatives. “It was great for all fans and members of our community to see the representation and diversity that we support and is a part of our team. I think that’s really exciting.”

The first week of programming focused on Black hockey players who have made an impact in Pittsburgh, with a ‘Fireside Chat’ featuring Trevor Daley. He joined the Penguins hockey operations department this fall after retiring from an illustrious 16-year career.

The defenseman played a vital role in Pittsburgh’s back-to-back Stanley Cup championships in 2016 and 2017. He was one of Penguins general manager Jim Rutherford’s key acquisitions in the 2015-16 campaign that sparked the team’s midseason turnaround.

“It’s important to provide youth who are underrepresented in the game of hockey with images of diversity and achievement in the sport,” said Tracey McCants Lewis, the Penguins’ Vice President of Human Resources and Deputy General Counsel. “Representation matters.”

Attendees had the opportunity to listen in on a conversation between Daley and Penguins Radio Network and PensTV host Josh Getzoff. The two spoke about that power of representation in hockey, both on and off the ice.

Daley stressed how important it is to get involved with the community’s youth and prevent racial discrimination from the start, creating an environment where minorities can become hockey players in the same way others get to – something that he felt he was unable to do.

“I’m going to keep learning, keep trying to get better, and keep trying to help where I can help,” Daley said. “This is part of it, this initiative we are talking about today is part of it. If there’s a kid that looks like me, that’s seeing what I’m doing right now and what I’ve done – if I could help and send a message to him that this could be done, then let me know where to sign up.”

That tied in with the second week of programming, which focused on the future of Black youth in hockey and the community. The Penguins hosted a ‘Kids Breaking Barriers’ virtual panel featuring Joseph.

The event began with Joseph taking attendees through his own path to the NHL. The Quebec native spoke a lot about the support his family gave him throughout his childhood, noting that it really helped his confidence.

As Joseph hopped off for a moment, Dorin Dickerson – the Penguins’ Director of Lower Hill Development who is a former NFL player that also grew up playing hockey in Pittsburgh – hopped on to moderate a panel featuring local youth players and their family members.

Guests included former NHL player Rocky Saganiuk, who currently works as a manager for the Pittsburgh Penguins Learn to Play program, his grandson Colby – a former Pens Elite player – and two Mite players and their parent(s).

Having a forum that promotes open dialogue where children can ask questions and receive support and guidance is incredibly important, as the Penguins are fully committed to not only getting more Black kids exposed to the game, but to have more diversity in the NHL by drafting Black players from Pittsburgh.

Morehouse knows it will take a lot of work over a long period of time, but the Penguins are willing to do what it takes.

“I think we are standing at the front end of what can be truly remarkable growth of hockey in the inner-city and minority communities,” Morehouse said during last year’s Black Hockey History Day.

The third week of programming focused on Black women making an impact on and off the ice.

The Penguins, who are proud to have two Black women in prominent roles within the organization with McCants Lewis and Morrow, hosted a panel of female staff, league and partner executives and leaders of color – not just from the regional standpoint, but a national standpoint as well.

McCants Lewis was joined by four other women who are making an impact on and off the ice as they shared their personal experiences, pathways and valuable advice with nearly 250 audience members.

And while they all faced adversity as black women, a minority in many cooperate workplaces, the panelists spoke about how they found their voices and took action when things did not line up with their personal morals, beliefs and identities. The women also highlighted some of the mentors and sponsors who helped them break through ceilings and advance in the workplace.

The fourth week of programming focused on the identity and history of the Hill District. There was an on-site artistic performance and demo piece shot from the August Wilson Center to appreciate the culture of the community that the Penguins have been guests of for so long.

It focused on several different prominent aspects of African American culture, including food, music and dance. Dr. Kimberly C. Ellis, an award-winning Performing Artist, Activist and Entrepreneur who is a Ph.D. Scholar of American and Africana Studies, had a conversation with Pittsburgh native McCants Lewis about identity through different outlets.

One of the songs that the dancers performed to was Lift Every Voice and Sing, which McCants Lewis and Ellis explained is the Black National Anthem. The song originates from a poem written by James Weldon Johnson, and it resonated with so many that the poet’s brother wrote a song out of the poem five years later.

There were also opportunities for the front office to get involved with different virtual panels, along with community volunteer efforts.

They reminded listeners that people holding positions of power must want to see change, and then be honest about what they do not know or need help with in making those changes. They stressed that more businesses need to seek out minority talent from the beginning and have it built in from the start.

While it truly was an amazing month, the Penguins’ commitment to making the sport a more open and welcoming environment for everyone regardless of their race, gender or sexual orientation isn’t just limited to this month.

The Penguins are truly invested in making diversity, equity and inclusion part of their culture and core business practices, doing everything they can to make real and lasting changes. The organization formed an internal Diversity, Equity and Inclusion (DEI) Council whose purpose is to promote those three pillars in every facet of the organization with year-round programming both on and off the ice.

“It’s very clear that our leadership is 100% committed and dedicated to this work,” Morrow said. “I can see the progress happening and I know that it will continue to happen, because we’re very intentional and thoughtful in trying to make sure that we put together programming and opportunities that resonate with the community and speak to our mission and our brand and our vision.”

Why Julia is Turning Heads in 2021 – The Next Platform